On the Inside of an Icon 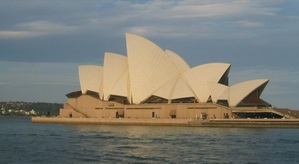 This week I went to Sydney for business (photos). This largely involved lying in my hotel with food poisoning but that’s another story. As I was in town, I had to check out the Sydney Opera House.

On Thursday I went to see Carmen in the Opera Theatre along with a lot of pensioners and a few tourists (the average age of the audience was about 65). The place was packed and with tickets going at $220 a pop, it’s safe to say these people do not have financial problems.

The performance was enjoyable although this Carmen was a total bitch and I was rather happy to see her murdered in the end. They portrayed the French equally well… as being the bunch of cigarette smoking bastards that they are. They were even smoking Gauloise so the whole place stunk. No in fairness it was not bad at all. I have, however, resolved never to see Carmen again… It’s never advisable to see opera in a language you speak because invariably the cast will butcher it.

The next night I went to see the Sydney Symphony in the concert hall. The hall has a cozy feel and even though there is more seating than the Esplanade, there seems to be a great focus on the stage. I felt closer to the musicians even though I was near the back. The hall has a high sweeping ceiling from which clear plastic donuts 1 metre wide (affectionately referred to as perspex calamari below) are suspended on cables. This is presumably to improve the sound quality – my chief interest for the evening.

I was keen to compare the acoustics of this famous space to my adopted home auditorium: The Esplanade. Major disappointment. The Symphony was doing a jazz event and were using speakers to amplify the sound. Huh? Then the guy next to me spills the beans that the SOH concert hall acoustics are notoriously bad. Well I’ll never know because I caught the show via the speakers above my seat. Imagine paying $90 for a ticket and then your aural experience comes down to the audio set up. Well the concert was a great performance I only wish I could have heard it live.

On the SOH: A disappointment since it opened its doors 32 years ago and the Australian Opera tried to cram Prokofiev’s epic War and Peace into the mean stage and claustrophobic pit of the opera auditorium. Not Joern Utzon’s fault. He had planned the big auditorium for opera, and the smaller for orchestral music. But the Sydney Symphony Orchestra wouldn’t leave the Sydney Town Hall unless it got the larger space. So the Opera Theatre became the Concert Hall and vice versa. Neither is a success. Even with the perspex calamari floating above the orchestra, the Concert Hall acoustics are certainly no better than the Town Hall’s, though the real problem is an opera theatre with too few seats, too small an orchestra pit and too little wing space. The Opera House should have been abandoned after stage two, when the shells were completed, without ever attempting the interiors. It would be a glorious white-tiled folly on Bennelong Point, strikingly beautiful as a soaring sculpture, and no less effective as a symbol for the city. The money spent redesigning then executing the compromised Opera House interiors could instead have financed a couple of plain but functional boxy auditoriums in some then-neglected part of Sydney which could have done justice to both voice and instruments. – source.