My secretary isn’t in today. Sick. She looked fine yesterday. Today she SMS’d that she has fever, sore throat, cough… the usual. Except the usual around here is cause for panic.

Yesterday they announced all the schools would be closed for a week. Supposedly that’s more to stop parents from freaking out than to stop SARS.

I was at the backstage of the Esplanade when the announcement came in. There were about 100 of us from the chorus crammed into a small room. We were warming up for the Mahler rehearsal. I will sing at the Esplanade for the first time this Friday. It’s very exciting.

But mixed in with the backstage buzz was a tinge of fear. The room was hot. We were all crammed together. I felt like I was in a petri dish.

For background effect we had the war playing out on Channel News Asia. Glenda was anchor… she’s getting too skinny. We need a bit of robustness in our anchors these days to cheer us up. 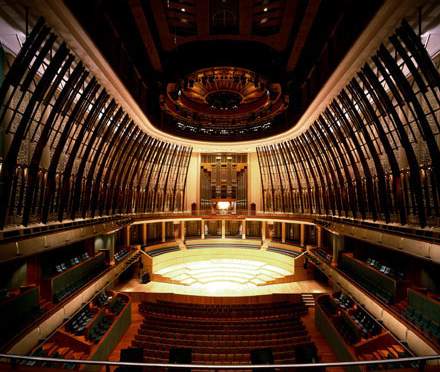 Singing with the Singapore Symphony Chorus (SSC) is quite thrilling to me. Backstage I keep bumping into members of the SSO who are so familiar I feel I should greet them like old friends. But of course I’ve only seen them on stage.

Lan Shui, the conductor, was still rehearsing with the orchestra when we’d finished our warm-up. Everyone was told to amuse themselves until 8:30 and then congregate at the stage door. Everyone took off and half the people misunderstood what Lim Yau, the choral master, said and ended up being MIA for about 20 minutes.

I walked around the backstage maze of the Esplanade for a while. At one point I ended up in the middle of the Oliver kids who were in full costume. Dodger, who was not in costume, offered to give me directions on how to get out. Fagin walked by looking very much like Riff Raff from Rocky Horror.

While others were watching TV or roaming the shopping mall, I made my way to the back of the concert hall. There is a side room by the concert floor which has a TV showing the transmission from the conductor cam. A little cam and microphone picks up everything the conductor says and does. It’s not a flattering angle. It made Lan Shui look fairly ragged. Usually he comes across as clean cut Mr. Nice Guy (Mini Nice Guy that is as he’s only about 5’2"). See the image opposite and now add a 5 o’clock shadow and a few bags under the eyes and you’ve got the picture.

When I tired of the conductor cam, I watched the practice through a little window. Eventually that didn’t suffice and I snuck on stage. I kept my head down because I wasn’t sure if Lim Yau would appreciate his singers creeping around while the orchestra was trying to practice. I like him a lot but don’t really want to be around when he’s grumpy. He’s very witty and can be quite funny… but there is absolutely NO FOOLING AROUND when it comes time to work. I think he’s brilliant and full of vision. This place is lucky to have him.

Finally the chorus was invited in to the practice. This is when we realised half the chorus was missing. A quick search located them in the concert lobby.

When everyone was finally squeezed in, I found myself smack in the middle of the lot sitting behind the percussion section. Lim Yau said it was OK to block your ears when they started to bang away as long as you weren’t too dramatic about it.

Lan Shui introduced the soloists. There was one Soprano and one Alto. Apparently the originally scheduled alto had to go to the hospital for some emergency and they had to find a replacement. I don’t know if I heard him right but I think he said he bumped into the replacement on a train. I don’t think Lan Shui should be riding around the MRT looking for soloists. With SARS floating about that’s one of the first places you’d catch it.

We’re singing Mahler’s 2nd, the Resurrection. Only the finale – the 5th movement – has choral singing. So we (we being the three choruses coming together for this performance: the SSC, the Singapore Philharmonic Choir and the Bible College) spend about 75 minutes backstage and then have about 10 minutes during the second intermission to take our places. There’s 160 of us so it’s a scramble. I can’t believe they were actually considering making the women all wear skirts. There is no way anyone is going to shimmy up onto the risers in a full length gown without looking like a complete twit.

Our first run through was appalling. The chorus was about a second ahead of the orchestra. Lan Shui didn’t seemed phased in the least. We ran through a few more times and focused on the weak areas… but it still didn’t seem like the chorus was pushed to perform its best. The woman from the train was struggling a bit as well.

Still, the music the orchestra produced was heavenly and the soprano was breath taking.

We have one more practice to pull it all together.

Today I’m still buzzing… but I have a sore throat. This is fairly usual for me after singing a lot. My voice teacher says it’s because I’ve been thrown in the deep end. I didn’t have any experience before getting through my SSC audition and now I’m pushing my voice almost daily.

Still, I feel rather under the weather today and given the fact that everyone is losing their head, it’s a bit upsetting. I’m not worried about getting SARS. If I do, I do. I just don’t want to get it until Sunday… after the performances are over.

If I have to go into quarantine because my secretary has SARS, I’ll never talk to her again.

I’ve been for a coffee now but don’t feel much better. There were some Stones roadies at the Stabucks looking rather well dressed for roadies. They had a certain “roadie-ness” about them but were wearing golf shirts which read “Rolling Stones Asia Tour Support Crew”. Since when did roadies trade in their black T-shirts for Navy blue golf shirts?

I just read that they’ve cancelled their trip to Hong Kong. If Mick is going to chicken out what hope is there?

art music
« At home with Agent 99 » About Lan Shui